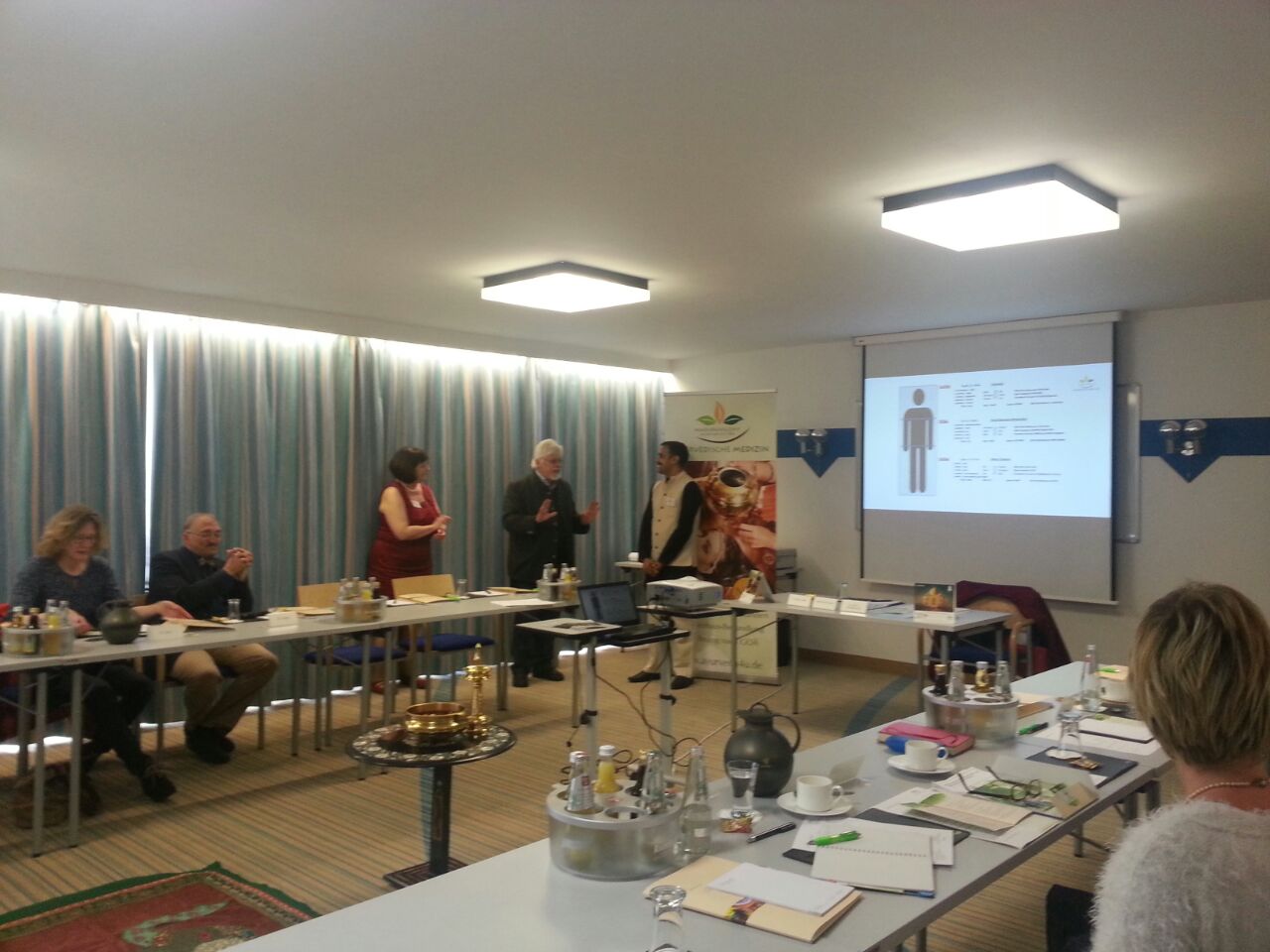 For the very first time in Germany, Madukkakuzhy Ayurveda, Germany invited interdisciplinary chief physicians and general practitioners to a conference on “Ayurveda Meets Western Medicine or what can we learn from each other” from May 1st – 3rd. 2015 at Bad Bocklet, Germany. The conference was organized at Kunzmann’s Hotel and Spa. The conference was opened by Dr. Wolfgang Back, Mayor of Bad Bocklet who introduced Dr. Jobin J Madukkakuzhy And Ms. Ebba-Karina Sander to the team of doctors at the conference. Inaugural speech on Ayurveda congress was given by Ms. Ebba-Karina Sander.

The symposium was attended by both occidental and oriental medical practitioners. The first day of conference was marked with lectures from Dr. Jobin J Madukkakuzhy, Dr. Christoph Garner-Chief Neurologist, Bad Griesbach and Dr. Thomas Heinz-Chief Physician Such Kliniken. Dr. Jobin J Madukkakuzhy, Director of Madukkakuzhy Ayurveda introduced the concept of Marma points and their interventions in the area of pain management and demonstrated it to the participants of the conference. Dr. Thomas Heinz spoke about the Addictions and Treatments chances in Ayurveda which was followed by the lecture of Dr. Christoph Garner who gave great insights about the role of Ayurveda in Neurological disease.

The second day of the conference was marked with lectures on the Ayurveda therapy “Shirodhara” (forehead) and its many applications in the area of ​​the autonomic nervous system as well as in trauma therapy. Dr. Sajan Joseph, the in-house doctor Madukkakuzhy Ayurveda, Bad Bocklet spoke about scientific aspects of Shirodhara and Dr. Sajan Kumar presented his views on Shirodhara and philosophical view and lectured on “Ayurvedic perspective of burn out and sleep disorders”.

In an important contribution Dr. Holger H. Bringmann, Neurologist, Department of Psychiatry at the University Hospital Halle / Saale, spoke about the origin and definition of consciousness, the search for return link (religion) which is not only mental illness based. In the holistic approach of Ayurveda the aspects of human existence are addressed and respectfully integrated into the treatment.

The third day of the conference saw Dr. Sajan Joseph speak about the use of Ayurveda in skin diseases. Ms. Christiane Gloacker presented her views on Ayurveda and Yoga.

Dr. Annette Müller-Leis Gang, board member of DÄGAM (German Medical Society for Ayurvedic Medicine), the main sponsor of the congress, drew on her vast experience as a family doctor, Ayurveda and occupational medicine and talked about efficient treatment on asthma, metabolic syndrome and diabetes with focus on Yoga and nutrition. Several well-known hospitals in Germany are willing to test and study the effects of Ayurveda in in pilot projects: Immanuel Hospital , Berlin and Evangelical KH Hattingen headed by Prof. Horst Przuntek.

For Booking Cure In India

For Booking Cure In Germany